The solar irradiance has a predictable annual variation because the Earth's orbit is slightly elliptical instead of being perfectly circular.

Using multiple satellites the United States NASA conducted Solar Irradiance Measurements during the time interval 1978 to 2007. The earlier results of this solar irradiance monitoring program are shown below: 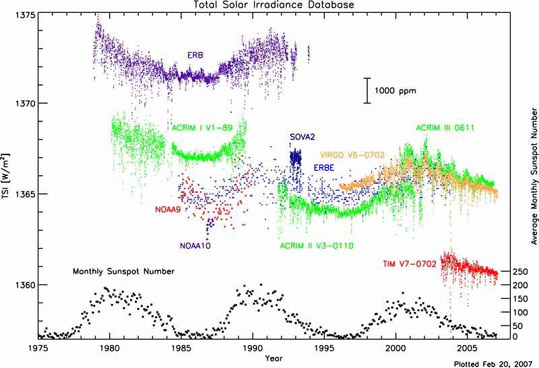 The individual satellite instruments show that the solar irradiance has been constant within about +/- 3 W/m^2 over a 28 year period. The solar irradiance variation is due to:
i. Rotation of the sun exposing different sun spots;
ii.The orbit of the earth which is very slightly elliptical;
iii.The 11 year sunspot cycle.

The fact that solar irradiance is nearly constant over time rules out short term variability of the sun or the Earth's orbit as being significant causes of global warming.

The data also shows that there are significant systematic errors in the individual satellite borne instruments. The individual instruments give average values of solar irradiance Ho in the range:
1361 W/m^2 < Ho < 1372.5 W/m^2

For the purpose of practical calculations a constant solar irradiance Ho of:
Ho = 1367 watts / m^2
is used on this web site. However, the conflicting data from the different satellite borne instruments indicate that the systematic error in Ho may be as much as:
+/- 6 W/m^2.
One of the practical issues in measurement of solar irradiance is precise alignment of the sensor with the sun-Earth axis.

Other sun like stars show comparable variations in irradiance

The Spectrum of the Solar Irradiance recorded by NASA is shown below:

The absorption of solar radiation by the atmosphere is indicated on the graph: