If the container or an object is made such that it reflects no electromagnetic radiation (Fr = 0) and has no filtering atmosphere (Ft = 1.0) it is known as a "black body". For black bodies there is a simple relationship between temperature and thermal radiation density.

As the molecule vibrates or rotates due to its electric dipole moment it can readily emit or absorb electromagnetic photons at its rotation or vibration frequencies. Within an assembly of many molecules different molecules types have characteristic frequency bands at which photons are readily absorbed and/or emitted. The rate of photon emission/absorption and the average photon frequency increase with temperature.

DEEP SPACE:
In deep space there are no walls. Using radio telescopes astronomers have determined that in deep space the average radiant energy density corresponds to black body walls with a temperature of about 2.7 degrees K. Most real objects such as planet Earth are much warmer than this and hence their equivalent black body surface temperature can be determined by analyzing the spectrum of the thermal radiant energy that they emit.

However, an atmosphere around a planet introduces complications. From an emitted thermal radiation perspective the surface of the planet is not at the solid-gas interface. From an emitted radiation perspective the surface of the planet is at the interface between the vacuum of space and the gas molecules that readily emit or absorb thermal frequency radiation. For CO2 and ozone gas molecules this interface is in the upper atmosphere and for H2O molecules this interface is at lower altitudes where clouds occur. On a crystal clear cloudless day the interface moves down to close to ground level.

MATHEMATICAL CHARACTERIZATION OF THERMAL RADIATION:
A photon is a packet of radiant energy. The energy E of a photon is given by:
E = h F
where:
h = Planck constant
and
F = radiation frequency.
Hence there is a direct proportionality between a photon frequency and photon energy. 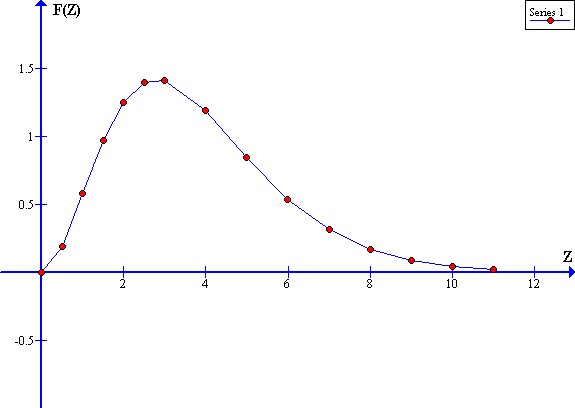 Thus Ta is the actual temperature that causes the same thermal power emission per unit area P as a black body at temperature Te.

For a real Earth with an atmosphere:
Ft < 1.
Hence:
Ta > Te
which causes an increase in emission temperature Ta due to the presence of an atmosphere with IR absorption bands.

These equations can be numerically evaluated to find the ratio (dFt / Ft). In the ratio the constant:
{15 / Pi^4} cancel.

Now consider two cases a and b corresponding to Ft = Fta and Ft = Ftb.

Once these values are determined the effects of changes in individual GHG concentrations are easily determined. for example if the CO2 concentration is doubled then [Cob(W) Pb] is replaced by [2 Cob(W) Pb].

These equations relate Ft to Ftw(W), which is the frequency or wavenumber dependent emissivity.
Note that "wavenumber" is defined by:
Wavenumber = F / C

THERMAL POWER EMITTED BY AREA As:
For a real body with emitting surface area As at temperature Ta the thermal radiation emitted is:
Ft Cb Ta^4 dAs

HEAT ABSORPTION THEORM:
The following heat absorption theorm can be used to quantify the net rate of heat absorption caused by global warming in situations where the surface temperature is held constant by a phase change such as the melting of ice and/or by mixing within a large thermal mass.

Note that if both situations are at the same latitude the quantity:
Ho (-dFr) (Ac / As) - dFt Cb Ta^4
is the same.

This equation relates the global warming induced change in heat absorption rate at constant temperature (the ocean) to the global warming induced change in temperature with no net heat absorption (very dry land). The practical significance of this equation is that it permits calculation of dHa for oceans or for irrigated farm crop land from the change in average temperature dTa obtained from mathematical analysis of the Earth's thermal emission spectrum.

TEMPERATURE OF AN IDEAL BODY:
It is helpful to first investigate the theoretical temperature Te of an ideal spherical body with a partially reflecting surface. Assume that the reflectance Frw(W) and emissivity Ftw(W) of the surface are frequency independent. Let Te = surface temperature of this ideal body.
With frequency independent reflectance and emissivity:
Frw(W) = Fr= constant
and Ftw(W) = Ft = constant

ACTUAL EMISSION TEMPERATURE FOR Ha = 0:
For dry inland locations combining the above expressions for Ta and Te gives:
Ta = Te [(1 - Fr) / Ft]^.25
This expression shows the change in emission temperature from Te to Ta caused by non-ideal values of Fr and Ft. The emission temperature Ta is the cloud level temperature of a location on the Earth's surface where Ha = 0, as seen from outer space. Note that for the Earth much of the emitted thermal radiation originates at cloud level so the emission temperature Ta is generally less than the ground level temperature Tag. Most of the solar power absorption by the ocean causes evaporation which is energy balanced by thermal radiative emission from the condensing water vapor, so the net heat absorption or net heat emission is relatively small.

Since Fr and Ft are functions of cloud cover, which varies both in time and location, the emission temperature Ta is locally highly variable. Temperature Ta will only seem to take on an average value when the whole disc of the earth is viewed so that local variations in Fr and Ft average out.

Note that this expression for (Tab - Taa) in terms of Taa, Fra, Frb, Fta and Ftb is exact for Ha = 0. Except for wind effects there are no assumptions or approximations. To the extent that a change in atmospheric composition affects measured values of Fr and Ft the effect of the change in atmospheric composition on Ta can be precisely calculated. However, the relationship between emission temperature Ta in the atmosphere and temperature Tag at ground level remains to be determined.

Then:
(Tabg - Taag) = 1.7 Taa [[(1 - Frb) Fta / (1 - Fra) Ftb]^0.25 - 1]
This equation could potentially be used to evaluate future global warming if sufficiently accurate measurements of the changing values of Fr and Ft become available.

Let Ap = polar ocean area
Then the rate of heat absorption by the oceans is given by:
Ap dHa = (dTa / Ta) Ho (1 - Fr) Ap
This equation, which gives the net heat absorption rate by oceans, is of importance in calculating the polar ice melting rate and hence the future rate of increase in sea level.

EXTRA IRRIGATION REQUIREMENTS:
One of the functions of farm crop irrigation is to maintain crop temperature for optimum growth and to prevent crops being damaged or destroyed on hot days. Irrigation water provides cooling by evaporation. The resulting water vapor is wind borne far from the farm before the water vapor condenses. The latent heat released during condensation contributes to the planetary infrared emission, so evaporation of irrigation water does not directly contribute to the net planetary heat absorption rate. The increase in required crop irrigation per unit time due to global warming is given by:
dHa / (Ro Hv)
where:
dHa = increase in heat absorption per crop unit area per unit time due to global warming
Ro = density of water (1000 kg / m^3)
Hv = latent heat of vaporization of water (2270 kJ / Kg)

Recall that:
dHa = (dTa / Ta) Ho (1 - Fr)
where dTa is obtained from analysis of the Earth's infrared emission spectrum.