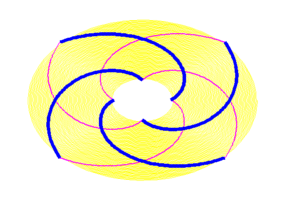 The physical laws are best described by mathematical equations. At the macroscopic level the equations usually have unique real solutions. An important exception is computer memory where electronic positive feedback is used to give each memory bit two real stable states.

At the microscopic level the mathematical equations for atomic interactions often have multiple discrete real solutions, generally known as energy states. The existence of these multiple real solutions makes evolution somewhat non-deterministic and gives life forms a limited degree of free will. In adverse circumstances the continued survival of a particular life form may depend on how prudently that life form exercises its free will.

The universe contains a large number of independent energy packets. At any instant t in time energy packet i is characterized by: its energy Ei, its position relative to the observer:
(Xi - Xo),
and its relative energy motion vector known as momentum Pi. In general:


Pi = [Ei / C^2] [Vi]
where C is the speed of light and:
Vi = d(Xi - Xo) / dt
is the energy packet velocity at its position:
(Xi - Xo).
For an isolated energy packet Ei and Pi are constant. During each particle interaction both total energy E and total momentum P are conserved.

The second type of energy packet is known as particles.

There are a few common atomic particles. Each atomic particle has a high energy density near its nominal position and has a surrounding lower energy density vector field that extends to infinity. Each particle has both field and non-field energy. The non-field energy component is very stable and can only be modified via an apparatus such as a high energy particle accelerator or a nuclear reactor which can impart very high energies to individual particles or which can produce anti-matter.

FIELDS:
Although particles have a nominal position in reality each particle's energy is contained in a field of changing energy density spread out through space. At large radii R from the nominal particle position the field energy density declines in proportion to (1 / R^4), which rate of decline is sufficient to keep the total energy associated with particle i finite.

The particle rest energy has gravitational, electric and magnetic components which are caused by the presence of concentrated energy, charge and charge motion. In addition to rest energy each particle has kinetic energy caused by momentum.

In circumstances where there are multiple interacting particles there are additional field energy components related to interparticle vector field overlap. Interparticle vector field overlap causes non-linear changes in the local field energy density, which in turn cause particles to experience potential energy gradiants, also known as a forces. Potential energy gradiants cause particle relative motion. This particle energy motion, known as linear momentum, is the result of conversion of part of the field potential energy into kinetic energy. In certain circumstances this process can operate in reverse to convert kinetic energy into field potential energy.

Vector field fluctations propagate at the speed of light C and convey both radiant energy and linear momentum.

Radiation often conveys energy away from interacting particles leaving these particles bound together in a mutual potential energy well.

POWER:
Power is a rate of recoverable energy flow in a particular direction from one spacial region to another. While the energy Ei of particle i is only a function of location Xi, power also involves the energy velocity vector Vi. Power may change with time.

WORK:
Work involves delivery of energy from an available power flow in order to do something useful for mankind, such as pumping water uphill, creating artificial light or moving an automobile. In most circumstances work is a result of harnessing momentum that arises from changes in field potential energy due to changes in particle field overlap.

PHOTONS:
Photons are quantum field fluctuations that propagate through space at the speed of light C. Photons convey energy and momentum but have no net charge or rest energy. If not absorbed, guided or confined, photons eventually spread through the entire universe.

At time t each photon has an energy, a nominal position, a vector momentum and in combination with other photons acts as a wave propagating at the speed of light in the frame of reference of an inertial observer.

Photons can convey energy into or out of a mutual potential energy well.

MUTUAL POTENTIAL ENERGY WELLS:
When isolated free particles approach each other so that their fields overlap, often part of the particle field potential energy is converted into particle relative linear momentum which causes the particles to further accelerate toward each other. Then part of that relative linear momentum becomes kinetic energy and then photon energy, which is radiated away into deep space. This radiant energy loss causes the previously free particles to become bound together within a mutual potential energy well. Stars, planets, liquids and solids that hold together assemblies of atoms are examples of mutual potential energy wells.

HEAT:
Heat is the thermal energy (energy associated with random particle motion) contained by a large assembly of interacting particles. These particles are usually confined by some form of container or a mutual potential energy well. Temperature is an indication of the average thermal energy per particle. Heat tends to flow from a region of high temperature to a region of lower temperature. A consistent heat flow in a particular direction is thermal power. With an appropriate heat engine a portion of this thermal power can be harnessed to do work.

An assembly of stable conserved particles generally transitions between energy states by emitting or absorbing photons of discrete frequencies.

The field potential energy of a particle arises from its charge quantum circulating around a complex closed path at the speed of light. The relative geometric shape of the closed path is stable but the length of that path increases with decreasing particle rest energy. A consequence of this relationship is that charge quantization causes photon energy quantization.

STABLE PARTICLES:
A stable free charged particle has a non-zero energy at rest and has nominal position and velocity vectors, where the velocity magnitude is less than the speed of light.

Neutrons behave as quasi-stable particles. When bound in a nucleus neutrons can exhibit very long life. However, in a nuclear reactor a free neutron decomposes into an electron, a proton and a neutrino with an apparent half life of about 12 minutes.

Classical physics provides formulae that allow convenient solution of many practical physical probems. However, classical physics is a simplification of reality. In order to properly represent microscopic particle behaviour it is necessary to invoke quantum mechanics and relativity.

A seemingly strange feature of quantum mechanics is that in circumstances where there are multiple possible real solutions the solution adopted by a particular particle appears to be random.

A free particle moves unimpeded by other particles. Particles interact with other particles via field overlap in which case the total system energy, integrated over all space, including emitted or absorbed radiation photons, remains constant.

MATTER AND ANTI-MATTER:
Interaction of a free particle with its corresponding anti-particle often results in conversion of the total rest mass into gamma photons. Similarly, in appropriate circumstances high energy gamma photons with sufficient energy can form particle-anti-particle pairs. There are some nuclear decays that result in conversion of a high energy gamma photon into an electron-positron pair with immediate electron absorption and positron emission. However, very little anti-matter seems to exist in our local universe, so from the perspective of this web site, which is concerned with sustainable supply of energy to humans, the issue of anti-matter is almost irrelevant.

Gravitons are experimentally observable wave like gravitational field disturbances which propagate through space at the speed of light C.

NEUTRONS:
In a very high energy density environment, such as the center of a star, electrons and protons can absorb sufficient energy from their environment to form semi-stable particles with zero net charge known as neutrons. In a nuclear reactor environment free neutrons are unstable but can acquire long term stability by coupling with protons to form stable nuclei.

Neutrinos are experimentally observable neutral energy packets with no rest mass that are emitted during the decay of a free neutron into an electron and proton. Neutrinos propagate through space at the speed of light.

SPHEROMAKS:
Spheromaks are natually occurring electromagnetic structures that concentrate electromagnetic field energy as required for the existence of stable charged particles such as electrons, protons and atoms.

A spheromak circulates current at the speed of light around a geometrically stable closed path. The spheromak current path is a filament that traces out a closed surface known as the spheromak wall. The filament length is inversely proportional to the spheromak's field energy.

Spheromaks account for the Planck Constant and the Fine Structure Constant.

Spheromaks account for the absorption and emission of electromagnetic photons by charged particles in an externally imposed magnetic field. This phenomena is known as nuclear magnetic resonance.

Spheromaks also account for the absorption and thermal emission of electromagnetic photons by matter.

Spheromaks interact with one another at a distance via overlap of their external fields. Interacting spheromaks convert field potential energy into kinetic energy with respect to the particles center of mass, or vice versa. During such interactions spheromaks can emit or absorb radiation photons.

Under normal circumstances interaction between the particles' extended fields does not endanger spheromak stability. However, at very high particle kinetic energies particle interactions can cause spheromaks to restructure in what are termed nuclear reactions.

PHOTON ENERGY QUANTIZATION:
The quantized net charge Qs of a spheromak circulates at speed of light C around a complex closed spiral path of length Lh. Hence a spheromak has a natural frequency Fh given by:
Fh = C / Lh.

A change in spheromak energy dE is proportional to the spheromak's change in natural frequency dFh, via the formula:
dE = h dFh
where h is known as the Planck constant. However, h is not an independent physical constant. In reality h is a function of the charge quantum Q, the speed of light C, the permiability of free space Muo and the spheromaks geometrical shape.

The formula:
dE = h dFh
applicable to a charged particle leads to the equation:
Ep = h Fp which relates the size of the quantum of radiant energy Ep to the radiation frequency Fp where:
dE ~ Ep
and
dFh = Fp.
Thus the energy and frequency of a photon of absorbed or emitted radiant energy are closely related to the changes in the energy and frequency of the spheromak which absorbs or emits the photon. In fact it appears that photon energy quantization is a direct result of spheromak behaviour.