INITIAL U3O8 EXTRACTION:
The purposes of initial selective U3O8 extraction from used CANDU fuel are to:
1) Increase the Pu/U concentration ratio in the fuel residue as required for making FNR fuel;
2) Minimize the mass of U3O8 that must be electrolytically treated to produce FNR start fuel;
3) Reduce the gamma emission from the extracted U3O8 sufficiently to make the U3O8 economic to transport and store. In this respect the primary radio active species of concern is U-232 which can potentially occur in used CANDU fuel as a result of alpha particle capture and 4 n emission by impurity Th-232 atoms. The U-232 has a half life of 72 years and its decay path involves a hard gamma emission. Since the Th-232 impurity content in the uranium used to produce CANDU fuel can potentially vary it may be necessary to measure the gamma ray output from the separated U3O8 and to provide sufficient shielding to ensure regulatory safety compliance (Ref: Monica Regalbuto, monica.regalbuto@inl.gov, Purex expert at INL).

A paper relevant to the U-232 issue is: Uranium-232 Production In Current Design LWRs.

RECRYSTALIZATION:
The process of recrystalization of uranyl nitrate hexahydrate [UO2(NO3)2.6H2O] is used to selectively extract U3O8 from spent CANDU fuel. This process is ineffective at rejecting the elements Np and Cs. The Np simply stays mixed with the uranium. It is not a radioactivity problem unless it contains the isotope Np-237. Np-237 arises from fast neutron n > 2n reactions in U-238. In CANDU reactors the fast neutron flux is very low, so the Np-237 production is low so the contribution of Np-237 to spent fuel radioactivity is very low. This statement is not true for spent fuel from fast neutron reactors. Hence recrystalization of [UO2(NO3)2.6H2O] will not achieve comparable radioactivity reduction in spent fuel from fast neutron reactors.

The process of recrystalization of [UO2(NO3)2.6H2O] is also ineffective at rejection of CsNO3.2H2O. After the recrystalization steps Cs is rejected by heating the U3O8 to over 650 degrees C at which point Cs2O, Cs2O2 and Cs2O3 vaporize leaving behind U3O8 with some contaminant Np. As indicated above the contaminant Np is not a problem unless it contains Np-237 from fast neutrons interacting with U-238.

DEFINITION OF "LOCAL" AND "REMOTE":
To minimize spent CANDU fuel transportation costs selective uranium oxide extraction is performed at the CANDU reactor sites. The term "local" refers to the reactor site. The term "remote" refers to the main fuel reprocessing site which for certainty of public safety should be remote from any major urban population center. A remote site suitable for fuel reprocessing is Chalk River, Ontario.

CANDU SPENT FUEL SELECTIVE URANIUM OXIDE EXTRACTION:
The purpose of selective uranium oxide extraction from spent CANDU fuel at CANDU reactor sites is to reduce the spent fuel shipping cost by dividing the spent fuel mass into a large minimally radioactive portion and a small highly radioactive portion:
a) Portion "A" is 90% of the spent CANDU fuel mass and consists of nearly pure uranium oxide. Pure uranium oxide has the advantage that its radio activity is low so it can be transported with minimal gamma ray shielding. The required amount of shielding is set by the Cs-137 and Np-237 concentrations in the uranium oxide. These isotopes may be present at low concentrations due to non-idealities in the U3O8 extraction process.
b) Portion "B" is the remaining 10% of the spent fuel mass that is highly radioactive and that for bio-safety must be transported in lead containers that have walls that are about 30 cm thick. The cost of transporting portion "B" is dominated by the cost of transporting the required heavy lead containers. Hence from a transportation cost perspective the smaller portion "B" is with respect to portion "A" the better.

REPROCESSING AT A REMOTE SITE:
For reasons of public safety in the face of a potential terrorist attack the main fuel reprocessing is performed at a remote site such as Chalk River. The core rod material reprocessing must be done in a manner that ensures no accidental formation of a critical mass. The required non-aqueous electrolytic reprocessing is described in the book "Plentiful Energy" by Charles Til and Yoon Chang.

SPENT CANDU FUEL CONCENTRATION SEQUENCE:
Selective extraction of U3O8 should be done at existing CANDU reactor sites to realize about 97.55% of the spent CANDU fuel weight as pure U3O8 and the remainder of about 2.45% of spent CANDU fuel weight as a mixture of (fission products + TRUs + remaining uranium oxide). Enough uranium must be left in this mixture to meet the uranium metal content requirement of FNR fuel. The extracted U3O8 must be sufficiently pure to reduce its radio activity sufficiently to enable low cost transportation.

4. Remove any undissolved zirconium and transport it to the remote irradiated zirconium store.

7. Heat the remaining solution to boil off and recycle the HNO3.

8. Condense, collect and recycle the HNO3.

19. Heat the remaining solution to boil off the HNO3.

22. Wash the crystals with clean HNO3 to remove surface contamination.

24. Collect the remaining dry residue from the HNO3 wash as feedstock for further core rod reprocessing.

26. Condense, collect and recycle the HNO3.

30. Send the radioactive Cs2O, Cs2O2, Cs2O3 to fission product 300 year storage. After 30 years in storage the radioactivity should be dominated by Cs-137 (30 year half life) and Cs-135 (3.0 X 10^6 year half life). Use a segragated store in case this material contains other contaminants.

31. Collect the pure U3O8 residue and send it to supposedly pure U3O8 storage. The U3O8 may have to remain in this store for centuries until it is required for blanket rod fabrication. Use a segragated store in case this material contains unspecified contaminants. Since this material is reserved for future use as reactor fuel such contaminants have minimal import except for storage biosafety and contanination of the future reducing agent.

2. Electrolytically reduce the U3O8 to uranium metal using a carbon anode. At the carbon anode released oxygen combines with the carbon to form CO2 gas.

3. Send the uranium metal to the pure uranium store at the remote site.

8. Note that the released oxygen is not radioactive. Even O-19 will fully decay to stable F-19 by about 300 seconds after neutron absorption.

9. Send the metallic residue to the fission product separation process. 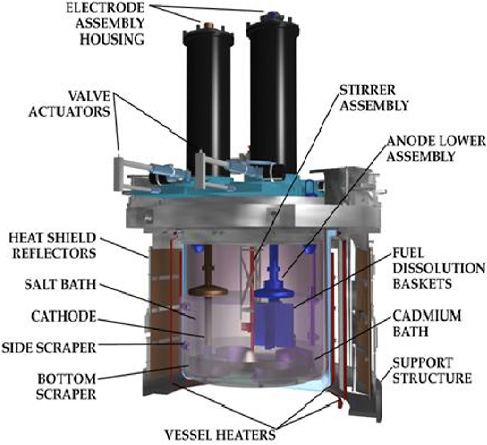 Conceptual diagram of an electrorefiner at the Argonne Lab circa 1999

The low atomic weight material discharge stream has two important components. There are fission product noble metals which remain at the apparatus anode and there are fission products that go into salt solution. However, Pu also goes into salt solution. Uranium plates out at the stainless steel cathlode. An important role of the liquid cadmium cathlode in the electro-refiner is to aid in extraction of a Pu-U mixture from the salt. The claim is that more than 99.9% of the fission fuel atoms are recoverable, indicating that the remaining Pu concentration in the molten KCl-LiCl salt is very small. This issue needs to be confirmed by mass spectrometer analysis.

2. Send the heavy metals to the core rod formation process.

3. Send the fission products + zirconium trapped at the anode to the zirconium recovery process.

1. Dry chlorinate the fission products plus the zirconium to form a spectrum of chlorides.

2. Distil these chlorides at about 331 degrees C to selectively remove ZrCl4.

4. Determine the weight of fission products flowing to 300 year storage.

6. Reduce the ZrCl4 with sodium to obtain NaCl + Zr.

7. Send the recovered zirconium to the remote site zirconium store.

8. Electrolytically separate the NaCl into Na and Cl. Send the recovered Na and Cl to the appropriate remote site stores.

9. Note that NaCl recovered from the contents of used fuel tubes is contaminated by long lived Cl-36 and should be kept separate from the Cl used for Zr extraction.

4. Alloy together the high atomic weight transuranium elements, uranium and the zirconium.

Blanket Rod Formation and Transport:
1. Draw uranium from the remote site uranium store. This uranium may be cointaminated with Np.

2. Assemble active fuel bundles and passive fuel bundles. Use an assembly jig that has sets of parallel steel sheets at 90 degrees to each other to position fuel tubes on the bottom grating.

3. Transport the fuel bundles to the FNR.

4. Load the fuel bundles into the reactor zone of the FNR primary sodium pool.

5. Slip a 15 inch square steel float over the indicator tube.

REACTOR OPERATION:
1. Run the reactor. While the reactor is running net neutrons are emitted by the core zone and are absorbed by the blanket zones.

2. After each year in the reactor zone move (1 / N) of the fuel bundles to the liquid sodium pool perimeter zone, where N is the number of years per fuel cycle.

3. After a fuel bundle has been in the perimeter cooling zone for ~ 6 years extract the fuel bundle for reprocessing.

3. Store the inert gas to allow it to naturally decay.

4. Send the steel components to interim storage prior to metal recycling. Note that the steel may require additional processing to remove surface residue.

5. Transport the useed FNR core rods to the remote site for further processing.

6. Transport the used FNR blanket rods to the remote site for further processing.

7. After a suitable decay period vent the residual inert gas to the atmosphere. Note that radioactive Kr-81, Kr-85 and Ar-39 must be well mixed with the atmosphere.

9. Send the sodium salts for interim storage in porcelain based containers. After 300 years the fission product I-129 will have decayed but Cl-36 will remain. After 300 years it may be economic to separate the NaCl from the other salts to minimize the cost of long term DGR storage. At that time it may be economic to selectively extract longer lived Sn (half life = 10^5 years) and Se-79 (half life = 6.5 X 10^4 years) and Nb-94 (half life = 2 X 10^4 years).

10. It is critical that Pu and other transuranium elements be completely extracted from the moleten salt to allow the salt to be released to the environment after 300 years.