INTRODUCTION:
Elsewhere on this website Fast Neutron Reactors (FNRs) have been identified as the primary source of energy for meeting mankind's future energy needs. This web page focuses on FNR features which prevent earthquake damage.

In order to allow thermal expansion and contraction of the secondary sodium pipes there is no rigid connection between the intermediate heat exchangers and the primary sodium pool liner. The reactor space enclosure walls above the primary sodium pool are attached to the pool deck. These walls are permitted to flex to maintain a gas seal while allowing for thermal expansion and contraction of the secondary sodium piping.. There is a small gap between the bottom of the reactor space enclosure side wall and the pool deck so that the wall can thermally expand with respect to the pool deck. This gap is gas sealed by a 26 m diameter flexible metal boot. The secondary sodium pipe jackets are sealed to this wall by ceramic insulation and bellows fittings.

EARTHQUAKE OVERVIEW:
Severe earthquakes can cause short term horizontal oscillating ground accelerations of up to 3 g, although 1.25 g is a more practical design limit. The design approach taken herein is to design the FNR fuel bundles to resist normal crane handling stresses and to mount the fuel bundles in a fuel assembly supported by an open steel lattice on ball bearings such that if a severe earthquake occurs the fuel assembly, the open steel lattice and the immediately surrounding liquid sodium stay almost stationary while the primary sodium pool walls move with the surrounding ground. This objective is achieved by providing low friction bearings between the open steel lattice and the primary sodium pool bottom.

Hence the peak velocity Vp is given by:
Vp = W A

Hence the peak horizontal ground acceleration Ahp is given by:
Ahp = [(W A)^2 / A]

Note that at a sustained 1.24 g horizontal acceleration the surface of the liquid sodium will be a more than 45 degrees to a horizontal reference.

Thus the fuel bundles and the intermediate heat exchanger bundles must both be sufficiently robust to withstand a transverse liquid sodium flow rate of 1.16 m / s.

POTENTIAL STANDING WAVES:
It is possible that there might be an issue with the natural surface wave resonant frequency of a 20 m diameter pool being excited by the earthquake frequency. The pool could be considered to be like a U tube where if the liquid rises on one side it falls on the other side. This system is in some respects like a pendulum. There is a kinetic enegy associated with the liquid sodium moving up and down. There is potential energy associated with one side of the pool being higher than the other side. A large slosh corresponds to a pendulum radius of 10 m. Smaller sloshes correspond to larger pendulum radii.

H = fuel assembly center of mass height above its height when the pendulum is upright.

Note that for severe earthquakes the cavity resonant frequency is much less than the earthquarke frequency. At low intensity earthquakes, where the earthquake frequency may be lower and periodic, we rely on the fuel bundles and the intermediate heat exchangers to provide sufficient primary sodium flow damping to prevent earthquake excited surface waves in the liquid sodium from growing.

Note that the pond will not support large waves at Rp > 10 m.

EARTHQUAKE TOLERANCE:
FNRs must not be damaged by horizontal accelerations of up to 4.9 m / s^2 (0.5 g) and must not go prompt critical under the circumstances of the most violent recorded earthquakes involving horizontal ground shaking with accelerations up to 28 m / s^2 and velocities up to 1.2 m / s. This level of earthquake tolerance can be achieved by supporting the fuel assembly amd open steel lattice on low friction bearings such that their inertia attenuates horizontal forces on the fuel assembly. This bearing arrangement is discussed on the web pages titled FNR Open Steel Lattice and FNR Earthquake Protection.

Here is a chart plotted by Dr. Alex Cannara of major recorded earthquakes. 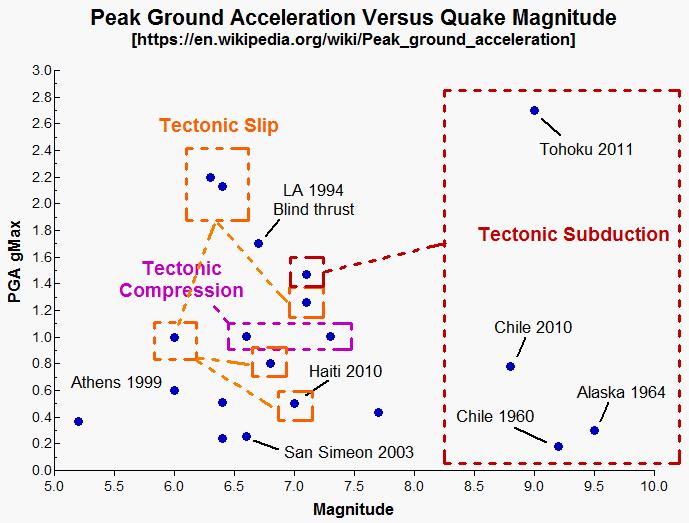 With respect to reactor flexing in an earthquake one must think about reactor reactivity. If a reactor flexes away from its normal steady state geometry we need certainty that the reactivity will decrease, regardless of the direction of flexing. If that is not the case, during a severe earthquake the reactor could briefly flex into a prompt critical state. In a U-235 fuelled thermal neutron reactor brief flexing into prompt criticality is not the end of the world because the flexing period is usually less than one second, so the time in prompt criticality is usually not sufficient for a large growth in the number of neutrons, provided that formation of coolant voids does not inject positive reactivity.

There are two other stability mechanisms. One involves making the reactor short term power stable on fast neutrons independent of delayed neutrons. This is possible because the fuel temperature responds to prompt criticality faster than do the temperatures of the surrounding steel and sodium. The other involves fuel disassembly within fuel tubes which disassembly must operate within about 10^-4 seconds. ie The mechanical dynamics of separation of core fuel rods inside a fuel tube must be comparable to the dynamics of a bullet in a gun.

Ideally a fast neutron power reactor should be stabilized by all three mechanisms.

A fourth important mechanism is to give the FNR sufficient thermal mass that it can withstand a brief period of prompt criticality.

One of the possible issues with a sodium cooled reactor is positive reactivity injection by a sodium thermal expansion and ultimately sodium voids. We need to keep the reactor in a regime where sodium void formation is impossible. That may require a deeper sodium pool to maintain a sodium pressure head than would otherwise be necessary.