OBJECT:
The object of this web site is to present climate change related information in a manner that is understandable, incontestable and suitable for forming the basis of public policy with respect to energy and environmental matters. The technical information is at a level that undergraduate physics students should be able to comprehend.

PUBLIC POLICY:
The practical public policies that must be implemented to prevent further global warming are presented. These policies are dictated by the laws of physics. There is no room for political denial or compromise.

EXECUTIVE SUMMARY:
The historical record indicates that during the period 950 AD to 1100 AD (the medieval warm period) the average temperature in the North Atlantic was significantly warmer than during the period 1500 AD to 1900 AD. During the medieval warm period Vikings colonized Greenland and Newfoundland. About 1200 AD the North Atlantic climate cooled and the occupants of these settlements either abandoned them or perished.

We are uncertain today as to the exact physical mechanism that caused the medieval warm period. We strongly suspect that this warming was a result of a temporary decrease in the North Atlantic albedo (solar reflectivity). This change in albedo could have been caused by a change in atmospheric chemistry, by a change in the sun's emission of ionizing radiation or by a change in the Earth's or Sun's magnetic field. We have seen in the last few decades that a small increase in CFC's in the atmosphere has a profound effect on upper atmosphere ozone concentration which in turn affects the Earth's albedo at ultra-violet wavelengths, especially in polar regions. We have also seen significant movement of the Earth's magnetic poles.

During the 20th century there were new causes of planetary warming which have continued into the 21st century. This warming is caused by an increase in the atmospheric carbon dioxide concentration and by ongoing release of heat from stored chemical and nuclear energy.

Accurate measurements of the atmospheric carbon dioxide concentration have been made at Mauna Loa, Hawaii by the Scripps Institution of Oceanography, NOAA Earth System Research Laboratory and others since 1958. These measurements are graphically presented below. 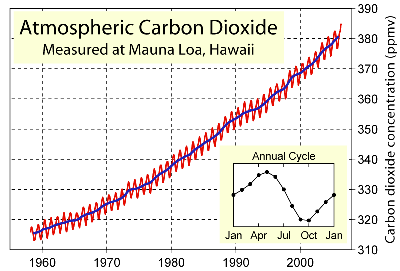 If the present trend continues the atmospheric carbon dioxide concentration measured at Mauna Loa, in the middle of the Pacific Ocean, will reach 560 ppmv, twice its historic level of 280 ppmv, before the year 2078. In major metropolitan areas, where there is ongoing local CO2 emission, the average CO2 concentration is well over 400 ppmv and is continuing to rise.

Accumulation of excess carbon dioxide and other greenhouse gases in the Earth's atmosphere reduces the Earth's infrared emissivity. The reduction in infrared emissivity causes an increase in the atmospheric temperature over dry land, causes net heat absorption by the oceans, causes increased evaporation per unit area from irrigated farm land and causes melting of otherwise permanent ice.

Since water vapor is also a greenhouse gas, the Earth's infrared emissivity is further reduced by the increase in average atmospheric water vapor concentration. The thermal effects of this additional reduction in emissivity are partially cancelled by formation of additional cloud cover, which slightly increases the Earth's reflectivity (albedo) in the solar spectrum. However, the net effect of the increase in average atmospheric water vapor concentration is to amplify the increase in atmospheric temperature over dry land that is directly caused by non-aqueous greenhouse gases. The total green house gas induced temperature increase over dry land is known as "global warming".

The problem of reduced agricultural output is further aggravated because the supply of fresh water for summer irrigation is diminished due to loss of mountain snowpacks and due to increased evaporation from open irrigation reservoirs. The resulting food shortage is further compounded by an increasing human population and by increasing use of agricultural products for biofuels as well as for food. Relatively few people in the industrialized countries realize that reliance on liquid hydrocarbon fuels will soon lead to world wide starvation.

Very few governments are taking this issue seriously. In most cases politicians neither grasp the underlying physics nor the full consequences of failing to promptly make the public policy changes that are necessary to avert a global warming disaster. The existing political responses are at best half measures that may temporarily deceive the public but will not solve the problem. The catastrophic consequences of these inadequate political responses will be born by our children.

Lack of understanding of the science of global warming is no excuse. Our neighbouring planet Venus has an atmosphere that is almost entirely composed of carbon dioxide. The experimentally measured surface temperature on Venus is about 400 degrees C higher than it would be if Venus had a nitrogen/oxygen atmosphere similar to Earth. The influence of atmospheric carbon dioxide on surface temperature is unmistakeable, even to those who have no training in physics. For those who understand physics, Venus demonstartes that carbon dioxide has absorption sidebands that extend right across the thermal infrared spectrum.

GLOBAL WARMING: Global warming is the increase in average atmospheric temperature over dry land that results from a world wide increase in average atmospheric greenhouse gas concentration, a decrease in planetary albedo or an ongoing release of stored chemical, nuclear or thermal energy. The increase in carbon dioxide concentration that is responsible for much of global warming is usually measured at a remote place such as Mauna Loa, Hawaii that is far from any significant man made source of carbon dioxide.

The huge advantage of this methodology is that it avoids the use of a climate model. Climate models involve assumptions and have difficulty accurately representing reality. Application of the principles of variational calculus essentially assumes that small changes in the atmospheric greenhouse gas concentration result in only small changes in the radiation emission profile. These small changes can be accurately interpolated from the known data. This methodology is a very powerful mathematical technique which has been successfully applied in other branches of physics.

The surface temperatures of Lake Ontario, Lake Erie and Lake Huron have all been further increased by use of these lakes as heat sinks for nuclear and fossil fueled thermal electric generating stations. The resulting increase in open water surface temperature accounts for part of the 2.44 degree C average temperature increase from 1965 to 2005 recorded by Environment Canada at the Toronto International Airport. During this 40 year period the atmospheric carbon dioxide concentration measured at Mauna Loa, Hawaii increased from 318.71 ppmv to 377.48 ppmv. Due to local sources of CO2, the increase in atmospheric CO2 concentration over southern Ontario was significantly larger.

The temperature increase due to global warming is already causing major ecological changes and is causing massive human population migration away from equatorial countries. During this author's lifetime the population of Canada has doubled purely due to immigration.

Global warming also causes net heat absorption by the oceans. In near polar regions the net absorbed heat melts floating polar ice. Melting of old floating ice does not change the sea level. However, melting of the old floating ice belts around Greenland and Antarctica allows super cooled glacial discharge streams from land borne ice to flow into the ocean. Such glacial discharge streams will cause a relatively rapid rise in sea level.

It is shown on the web page titled: Ocean Instability that at the ocean temperatures that prevailed in the late 20th century the exponential decay time constant To of excess carbon dioxide in the atmosphere is about:
To = 41 years

The only way to mitigate the height of the resulting sea level rise is to stop use of fossil fuels now in order to allow the transient atmospheric CO2 concentration to decay before thermal runaway is established.

The analysis of the temperature increase and net heat capture rate triggered by increased atmospheric carbon dioxide concentration is based on fundamental physics with no climatic model assumptions. The incident solar radiation data was recorded from 1978 to 2007 by multiple satellites. The infrared thermal emission spectrum of the whole Earth was recorded by the NASA Mars Global Surveyor spacecraft on November 24, 1996. The average planetary albedo was obtained from astronomical observations of the moon. The ground level temperature data over the 40 year period 1965 to 2005 was obtained from Environment Canada. The atmospheric carbon dioxide concentration was obtained from measurements at Mauna Loa, Hawaii. The bicarbonate ion concentration in the oceans was obtained by conventional quantitative chemical analysis done in both the UK and the USA. Other satellite and laboratory data are presented for explanatory and confirmation purposes.

LOCAL WARMING: Local warming is the increase in the local average atmospheric temperature over dry land that results from a local increase in atmospheric greenhouse gas concentration, a local decrease in albedo or local heat dissipation from an ongoing local release of stored chemical, gravitational, nuclear or thermal energy. In regions without ice or snow local warming tends to be greatest in proximity to carbon dioxide and heat sources such as power stations, traffic in major cities, building heating systems and major industrial processes. Proximity to stratified open water allows the average atmospheric water vapor concentration to increase with the local CO2 concentration, amplifying CO2 related warming. In polar regions there are additional local changes in the upper atmospheric ozone concentration that significantly affect albedo in the ultra violet range.

Another significant cause of a decrease in planetary albedo is desertification due to incorrect use of grassland for livestock as set out in the following video. DESERTIFICATION

CONCLUSIONS:
The temperature increase observed in Toronto during the period 1965 to 2005 was almost entirely due to increases in the atmospheric greenhouse gas concentration and local heat dissipation within the Greater Toronto Area. There is theoretical potential for some winter warming due to change in albedo related to melting of snow and ice, but the experimental data indicates that this effect is relatively insignificant in Toronto.