INTRODUCTION:
The following description of the functions of the various electricity regulatory bodies is from March 2017 emails from Paul Acchione to the Future of Energy Initiative (published with permission from the author).

FUNCTIONS OF ELECTRICITY REGULATORY BODIES:
It is important to have a common understanding of the power system and players involved in order to have a productive discussion regarding the functions of the RTOs (Regional Transmission Operators), ISOs (Independent System Operators) and LDCs (Local Distribution Companies or local electric utilities).

There are physical limits to the size of an alternating current (AC) power system.  For example if the load and generation are too far apart you can get dynamically unstable links in the network during system disturbances.  That is why there are direct current (DC) isolation boundaries between Quebec and the rest of northeastern North America and also between the western and eastern halves of the USA.

ISOs, RTOs and LDCs are different.  RTOs have broader responsibilities than ISOs with respect to the high voltage transmission system operation.

Typically ISOs manage the deregulated wholesale market of a number of states or sub-state regions that have agreed to be part of that ISO's wholesale electricity market.

RTOs manage a regional transmission system (one or more states or parts of states).  RTO boundaries are typically set by electrical reliability and transmission configuration considerations. That is why some states include only a portion of the state in the ISO or RTO and also why several states may want to be included in an ISO or RTO.  Electrically tightly coupled regions tend to be in the same ISO and RTO.  If both an ISO and RTO exist in a region, the ISO typically manages the wholesale market and the RTO manages the transmission system.

In Ontario the ISO is the Independent Electricity System Operator (IESO). It has been given some functions by the Ontario government that you often find in the RTOs in the USA.  For example the IESO handles short and long term planning for both transmission and generation and co-ordinates with RTO and LDCs on regional planning for local distribution system upgrades. LDCs manage a local distribution system.  LDCs are typically regulated by state boards in the USA or provincial boards in Canada. The LDCs are typically the billing entity for retail consumers.

ISOs and RTOs in the USA are regulated by the Federal Energy Regulatory Commission (FERC).  The reason is that the service areas of ISOs and RTOs cross state boundaries and are subject to federal regulation.  In Canada energy is a provincial responsibility under Canada’s constitution so federal regulations come into play only for energy transfers across provincial or national boundaries.  The amount of control by Canada's federal regulator, the National Energy Board (NEB), is quite limited compared to the regulatory authority of FERC in the USA.  In fact Canadian ISOs and RTOs are also affected by FERC rules because they trade electricity with US states and are subject to FERC rules when they are connected to the USA interstate transmission system.

Not all states in the USA or provinces in Canada have agreed to be members of an ISO.  Those jurisdictions will have their own regulated RTOs and LDCs and will conform to FERC rules when they are connected to the interstate transmission system.  FERC requires compliance to the North American Electric Reliability Council (NERC) technical reliability requirements.

State and provincial boards are required to recover the costs incurred by the appropriate ISO, RTO and LDC from retail consumers.  Rate setting is very complicated because it is not just about recovering all the costs.  It also involves assigning costs to different consumer rate classes in such a way that the rates are politically acceptable.

In Ontario we have one ISO - IESO for just Ontario, one RTO - Hydro One Networks Inc. (HONI) for just Ontario and about 70 LDC's.  LDCs typically serve a city but some like Alectra serve several large cities outside of Toronto. HONI owns the RTO and 3 LDCs that respectively serve 1 city, most of the rural areas in Ontario connected to the grid and remote villages not connected to the grid that use diesel and local small hydro for their electricity supply.  The 3 largest LDC's are HONI, Alectra and the Toronto Hydro Electric System (THES).  They each serve a population of over 2 million people.  Ontario has a population of over 13 million people. The organizational structure of the electrical power system that also includes both private and publicly owned generators is very complicated.  A map of the ten ISOs that operate within North America is shown below (courtesy of the ISO/RTO Council – IRC, see http://www.isorto.org/about/default for additional details).

In a region that is part of an ISO, the generators will bid for the right to generate electricity. However, the generators may be merchant or regulated facilities.  Merchant facilities have to find enough money in the auction market to survive.  Regulated facilities will have power purchase agreements that provide them a secure stream of funds to operate regardless of the market price.  That means most ISO areas will have other financial mechanisms to transfer excess profits or losses from regulated generators (ie: the difference between wholesale market prices and contract prices) to the retail consumers.  In Ontario the government has created a Global Adjustment mechanism that is administered by the IESO.  Essentially it is a markup or discount applied to the wholesale market price that is passed on to the LDCs who then bill the retail consumers an appropriate rate.  In the USA there will be a similar mechanism with a different name that the state boards will use to pass on those adjustments to the retail consumer via the LDC rates. When the power system runs on fossil fuels the market price is high enough that low cost merchant generators can survive.  As the grid becomes very low emission, the market price drops and approaches zero as emissions approach zero.  The reason is that wholesale markets dispatch energy based on marginal cost only (essentially the fuel price).  Several ISOs have introduced a "capacity market" to provide generators an alternative source of funds to support their fixed costs as the power system emissions decline.

Storage becomes more important as intermittent generation like wind and solar generation is added to the power system. Storage can be installed on the transmission system, distribution system or behind the meter in consumers’ homes/businesses.  Storage has fallen through the cracks in the organizational design of the deregulated electricity system markets.  The structure of retail electricity rates has a huge bearing on whether storage is installed behind the meter.  Wholesale market prices have a huge bearing on whether storage gets installed on the transmission or distribution systems.  At the moment storage is losing out because the retail and wholesale market prices do not allow storage proponents to build a business case to install it. It is currently more cost effective to curtail (waste) surplus electricity rather than store it for later use. 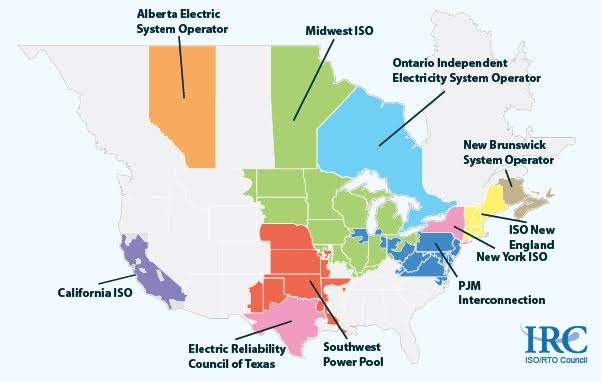 REGULATORY STRUCTURE:
Proponents of a completely deregulated, open market for electricity do not appreciate the special nature of electricity that would make such a market inherently unstable.

Electricity is a non-elastic commodity. Demand is relatively insensitive to price in the short term because the utility of electricity far outstrips its cost of production. Also there are long time delays between decisions to add capacity and when that capacity comes on-line to help mitigate high prices. Consequently, power systems typically have a significant amount of centralized planning and regulation in order for them to operate in a publically acceptable way (ie: reasonable prices and no blackouts or brownouts due to shortages).

In an ideal world we would create two independent entities to manage the development of the power system. They would be:
(1) an independent technical planning entity that analyzes what actually happens when various new and old technologies co-inhabit the power system.  That organization is responsible for ensuring the power system development plans of an evolving power system will meet all technical and environmental requirements at lowest cost. It is also responsible to provide alternative technically and environmentally acceptable plans with associated costs and the impact of each option on rates. Those alternatives are required to provide the independent energy boards (and their political masters) options to deviate from a preferred plan for public acceptability reasons.  Sometimes the optimum solution is politically unacceptable.  This technical entity can be part of the ISO, RTO or separate from either provided it has access to all the data they need from the ISOs, RTOs and LDCs.

(2) an independent energy board that evaluates the alternatives tabled by the technical entity at public hearings to arrive at a politically and economically acceptable final choice.  That board would then authorize a contracting authority (ISO, RTO, LDC or another contracting entity) to implement the approved changes. This independent board is responsible for protecting and balancing the interests of the various affected groups including the impact on related energy systems and their consumers (eg: interaction of the electricity and natural gas systems).  The board should be independent of the government so election cycles and political interests of those in power do not distort planning decisions.

Unfortunately, when consumers are mad about high bills or frequent blackouts or fuel shortages they appeal to politicians to fix the problem.  Wise politicians know how to set overall public policy goals and priorities and establish good governance models. They then leave the day-to-day detailed analysis and recommendations to experts with the required knowledge and experience.

Unfortunately over the last 30 years the Ontario government intervened 3 times in the electricity market to freeze or lower high rates and 2 times to add generation that was not required to create jobs during recessions.  Years after those decisions were made the additional costs arrived and electricity rates rose dramatically creating a new crisis for another government.  The long time delays between decisions and the arrival of the associated costs make it difficult for consumers to hold their government accountable for poor decisions.

The electric power system is the largest and most complex engineered system within any jurisdiction. It is unreasonable for consumers to expect politicians to have the knowledge and experience to make detailed design decisions regarding either technology or rate matters.

Ontario is a classic example of what happens when non-specialists are allowed to make detailed design decisions on either technology or rates.  Over the past 30 years Ontario has gone from one of the lowest cost electricity jurisdictions in North America to the highest in Canada and higher than over 50% of US states.  The engineers and other staff in the various organizations involved in operating the power system will of course keep the power system running reliably. Unfortunately, they can't make the additional costs go away.